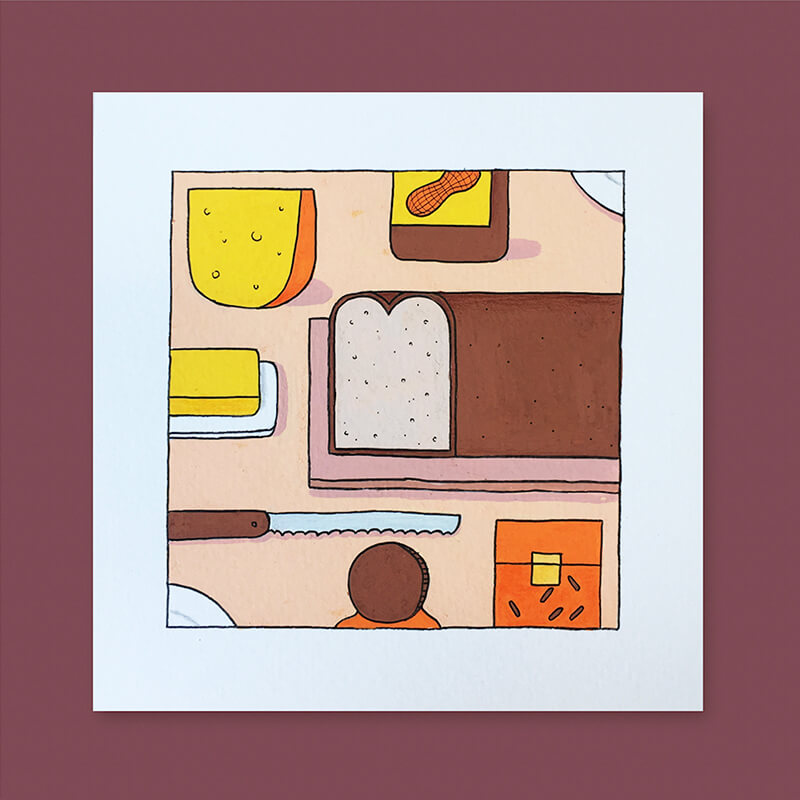 I’m working on a series of little images of typical Dutch Food. I figured non-Dutchies don’t know much about what we Dutchies like to put down our gobs, so I wanted to change that. And add a personal touch to it.

More will come in time.

1. PATATJE MET (Fries with mayo) SOLD: A lot of countries have fries as a side dish, but the Dutch will eat just fries and mayo for dinner.  I remember as a kid I would finish my fries and if I had mayo leftover on the side, as shown on the image, I’d scoop up the rest with my finger and eat it. I find that pretty disgusting now but I’ll still dip the shit out of it as long as there are fries.

2. Boerenkool met rookworst (Mashed kale and potatoes with smoked sausage)
The Dutch love “Stampotjes” – this is usually one or two vegetables cooked together with some potatoes and then mashed beyond recognition. That’s commonly combined with rookworst (smoked sausage), or a big meatball and gravy. In this case I chose to go for the “Boerenkool” version. I was never a big fan as a kid and I’m still not particularly crazy about it, but I can appreciate it if it happens to end up on my plate. The idea is to start out with having a pile of boerenkool on your plate, make a hole for the gravy in the middle, and then start cementing the whole thing with your fork till it looks like a brick. If that doesn’t sound appetizing…

3. Haring (Raw haring (fish))
I think this might be my favourite of all Dutch foods. I try to eat at least one every week, but I could have it daily as a snack. There’s actually a whole process that happens to it before we eat it “raw”. After it’s caught, it’s cleaned (except for its pancreas), it’s salted, and put in a barrel for a while (thanks Internet). The “cool” way to eat it is to hold the tail between your fingers, dip it in diced onion and lower the fish into your mouth. But I like to get it cut in pieces with onions and “plakjes zure bom” (pickle) on the side not to get smelly fingers.

4. Poffertjes (mini pancakes)
Kids love these cause it’s just a pancake, only small and cute. There are special poffertjes pans to make these and you usually eat them with butter and powdered sugar. I once baked these as a “dutch dish” at a cultural food event in Croatia for kids there. And it seems the word “Poffertje” sounds very much the same as the Croatian word for vegetable (povrće). Because of my limited Croatian vocabulary they figured poffertjes where made of vegetables so to them they were mankind’s best invention as they could eat something healthy and delicious at the same time. If only…

5. Boterham (bread/sandwhich)
Not claiming that bread is a Dutch thing but ‘broodje’ is pretty much the fuel the Dutch drive on. While being a child, as you don’t have much choice, you’ll eat it for breakfast and for lunch. Dinner is the only “other food” of the day. If you’re invited for lunch at someone’s house it will most likely be a make-yourself-a-‘boterham’ display, as you see in the illustration.